SIX SIGMA AT A GLANCE 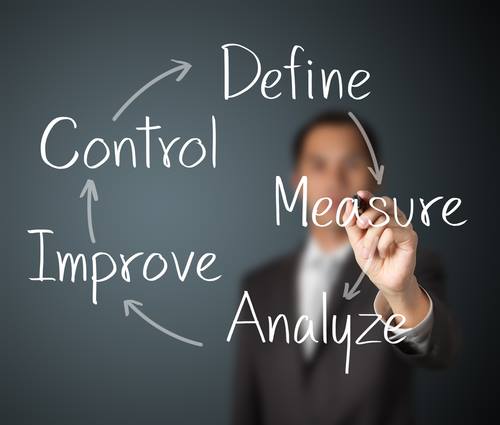 by simonhansen
Six Sigma is a management system for process improvement. The core element is the description, measurement, analysis, improvement and monitoring of business processes by statistical means. By using Six Sigma, the number of faulty processes, products or services can be reduced to a minimum, resulting in increased cost efficiency, increased sales and higher customer satisfaction.

Six Sigma improvement projects are led by specially trained employees. Six Sigma’s leadership psychology concept is based on role definitions that are aligned with the rankings of Japanese martial arts.

Make the next step: Your way to the Six sigma professional with the Six sigma college Duesseldorf. Do a training as Certified Six Sigma Green Belt and Black Belt.

To the homepage of the Six Sigma College Düsseldorf

Where does the Six Sigma concept come from?

Six Sigma was named after a statistical concept in which a process contains a maximum of 3.4 defects per million opportunities (DPMO). Six Sigma can therefore also be regarded as a goal in which not only are fewer errors made in processes, but this is also constantly achieved (low variance).

Six Sigma was developed by Motorola in 1986 and has since helped companies in every industry save billions of dollars.

Simply put, Six Sigma reduces variance so that products and services can always be delivered with their intended quality and reliability.

Six Sigma is based on a statistical concept: erroneous processes can be minimized if 6 standard deviations (6 sigmas) between the process average (mean µ at the peak of the normal distribution) and the upper and lower specification limits are maintained.

Values outside the specification limits are highly unlikely even if the normal distribution curve is shifted by 1.5 σ to the left or right. Thus, if a process gradually deteriorates over a long period of time, Six Sigma allows a kind of safety zone.

To increase the process sigma level, you must reduce the variance:

A lower variance in the service provision of your products and services enables you: